Sino-Soviet relations reached an all-time low in 1969, and by the summer of that year both Beijing and Moscow were preoccupied by the possibility of nuclear war. Starting in 1964, sporadic small-scale clashes with casualties on both sides had occurred at various points along China's north-eastern border. In 1969 the focus of attention was a small island (named Zhenbao in Chinese and Damansky in Russian) in the Wusuli River (Russian: Ussuri) that formed part of the border between the two countries. 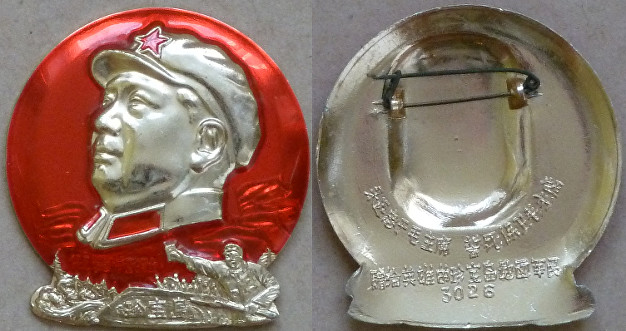 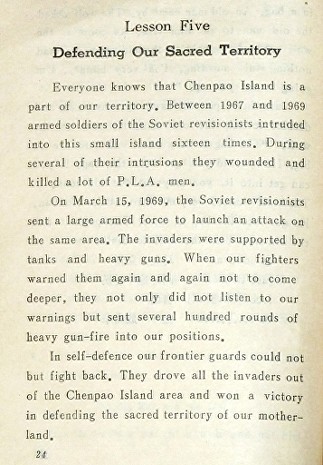 This badge was issued in Heilongjiang shortly afterwards by PLA Unit 3026, which may have been directly involved in the hostilities. According to the inscription it was presented to the military and civilian heroes of the area who defended the sacred territory of the motherland. Similar Maozhang commemorating this brief "self-defence war" were produced by various issuers including the Heilongjiang Provincial Revolutionary Committee and various military units.

Unsurprisingly, Chinese and Soviet accounts differ as to the proximate causes and outcomes of the "incident". Overall casualties for March 1969 totalled more than 1000, with the PLA suffering the greater losses. However, the Chinese had shown that they could halt a Soviet armoured advance in its tracks using conventional weapons (albeit of Soviet design). They were also able to capture a Soviet T-62 main battle tank and haul it away as a trophy of war and a treasure chest of the latest in Russian military technology.

Note that although pinyin had been officially adopted, this textbook still uses the Wade-Giles transliteration of Chenpao rather than Zhenbao. 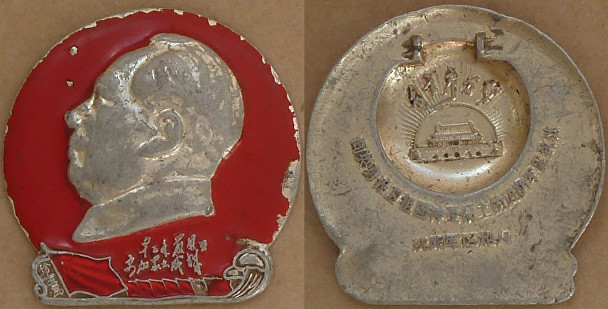 The above badge, issued in the name of Shenyang Military District Artillery, reproduces two lines from Mao's 1928 poem Jinggangshan on the obverse:

Already our defense is iron-clad,

The reverse inscription is a "Tribute to the frontier forces who have bravely defended the sacred territory of the Motherland".