This 1967 oil painting by artists from the Zhejiang Academy of Workers', Peasants', and Soldiers' Arts was entitled Chairman Mao inspects the situation of the Great Proletarian Cultural Revolution and shows Mao gazing  across a red-flag-strewn China towards a modern city (Shanghai?) near the mouth of a large river. The painting was reproduced as a poster, often with the addition of two lines from Mao's poem The Capture of Nanjing:

"But Man's world is mutable, 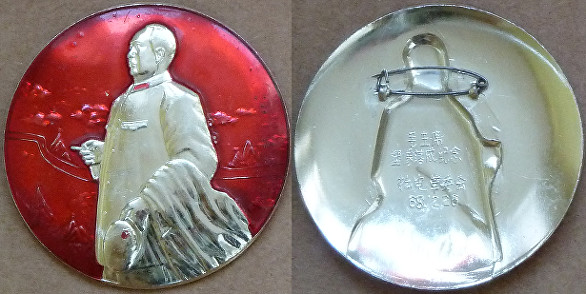 The painting reproduced as a gatefold in an unofficial edition of Mao's poetry published in Beijing and dated 1967.

This image of a calm and reflective Chairman was copied onto dozens of Maozhang; some of which, including all the badges shown here, flipped the image so that Mao faced to the left. On this first example, issued for Mao's 75th birthday in 1968, it is only the Chairman that has been flipped. In the background the river can be seen following the same left to right course as in the original painting.

Here the whole image has been flipped so that the river flows in the same direction as Mao's gaze. In addition to white clouds and sky and river in differing shades of blue, this badge is further enhanced by the inclusion of four revolutionary sacred sites - Shaoshan, Jinggangshan, Yan'an and Tiananmen - that do not feature in the original painting. 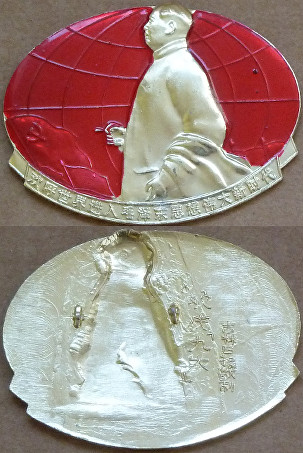 On the rectangular badge above, the flipped left-facing image of Mao has been set against an entirely different background. Instead of an aerial panorama of the country, there is a red sun against an oddly yellow sky, pine branches, and a pavilion atop a distant (and mist-shrouded?) hill. The calligraphic inscription on the obverse is the oft-quoted line, "On perilous peaks dwells beauty in her infinite variety" from Mao's poem The Fairy Cave at Lushan.

On the ovoid badge at left, Mao's pose has been subtly altered so that the Chairman is in stark profile. The cap has been omitted, and his uniform has been transformed into something approaching the scholar's gown he wears in the famous "Anyuan" portrait. Contemplation has become decision, and the flags, meridians and obverse inscription all serve to elevate Mao from China to the world stage.

*Seas become mulberry fields is a traditional Chinese idiom for the vicissitudes of life.