This badge was issued by the "Total Red" (also translated as "All Red" or "Full Red") faction at the Institute of Chemical Engineering in Beijing. The full name of the "Total Red" faction was the National Red Worker Rebel Corps, a mass organisation founded in November 1966. The founders were a disparate group of technicians and teachers who had one thing in common, they were from non-red family backgrounds and were intensely resentful of the the privileged classes of the Chinese Communist Party. 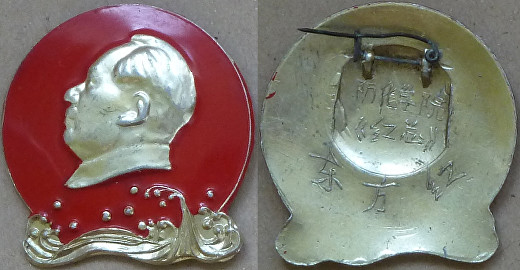 "Total Red" agitated on behalf of the temporary, contract and outsourced workers who did not enjoy the same benefits as permanent employees of state-owned enterprises, and who were not represented by the All-China Federation of Trade Unions. At a meeting on 26th December 1966, members of "Total Red" gained the support of Jiang Qing, Chen Boda and Kang Shen, and a "Joint Notice" establishing and protecting the rights of temporary workers was prepared and issued on 2nd January 1967. However, the "Joint Notice" did not gain approval at the highest level and almost immediately was withdrawn. The National Red Worker Rebel Corps was condemned as a reactionary organisation and was formally banned by order of the Central Committee and the State Council on 17th February 1967.