The book depicted on the badge at right is neither the Quotations nor the Selected Works; it is entitled Supreme Directives (alternatively translated as Highest Directives).

The first Supreme Directives were not officially sanctioned - they were issued by various factions to assist their comrades in their revolutionary endeavours. Subsequently the title was appropriated by the authorities; as a result the contents are a moveable feast. 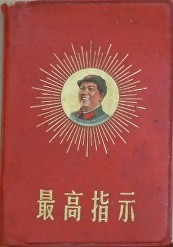 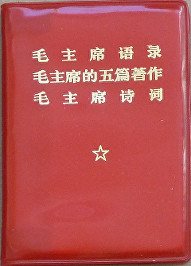 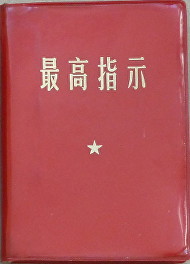 This volume reprints the contents of the official February 1969 version of Supreme Directives, but with the contents clearly indicated on the cover.

Whether by accident or design, this volume contains only the text of Quotations - PLA General Political Department edition, December 1967, Zhejiang, distributed by Xinhua Bookshops.

Contains three sections: the full text of the Quotations, the Five Constantly Read Articles, and 54 of Mao's poems.

This officially sanctioned volume, which was published at multiple locations, is the most commonly encountered version of the Supreme Directives.

Compiled and published by the Zhenjiang City Workers' Congress

Contains 222 pages of directives arranged in chronological order that had been published in newspapers since the start of the Cultural Revolution.

The Quotations was a valuable and vitally important summary of Mao Zedong Thought, but it was never intended as a guide to the conduct of the Great Proletarian Cultural Revolution - it contained no quotations later than 1964. From the outset Red Guards and other factional groups collected directives (zhongfa) and other significant utterances by Mao (sometimes taken out of context), and distributed them as typewritten and mimeographed copies. During the later half of 1968 some of these collections were published as Supreme Directives in the same red vinyl-covered format as the smaller editions of the Quotations. In the fast evolving landscape of the Cultural Revolution these supplementary Little Red Books rapidly became highly desirable items. The authorities appear to have responded by publishing an officially approved version of the Supreme Directives in the same small format but with completely different contents. 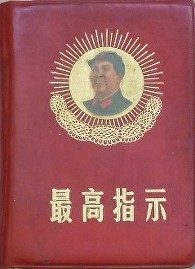 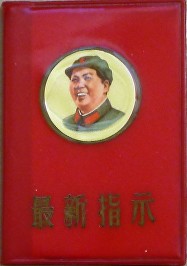 Published by the Propaganda Section of the CPC Central Committee's Department of Defence Industry Political Office. It contains Lin Biao's December 1966 introduction to the Quotations and 136 pages of Mao's post-1964 utterances.

This example was reprinted by the revolutionary committee of the state-owned Songling Machinery Factory.