The reverse inscription records that Chairman Mao established the Hunan Self-Study University in the premises of the  Changsha Chuanshan Association - the building depicted on the obverse.

After returning from the 1st National Congress in Shanghai, Mao and a few like-minded colleagues started the Self-Study University in August 1921  with Mao as director of academic studies. In his founding manifesto Mao criticised traditional shuyuan for being obsessed with the 8-legged essay and "modern" schools for wearing away students' personalities and destroying their souls. 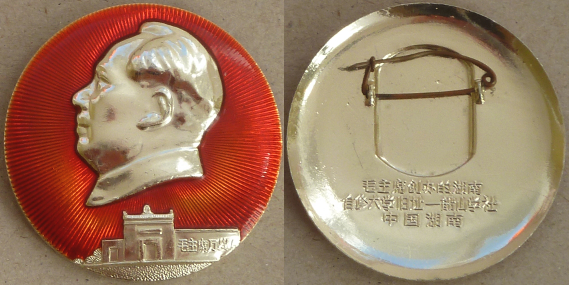 Students at the the new university were encouraged to read and research for themselves from a wide variety of Marxist and other revolutionary works, many of them supplied by Mao through his Cultural Book Society. It was not, however, all book learning and political theorizing - the students were also expected to work together to clean and maintain the fabric of the building. The Hunan Self-Study University lasted only two years; it was closed in late 1923 by the military governor Zhao Hengti on the grounds that it constituted a threat to public order.

I think we should create a new kind of life in Changsha. We should invite comrades to join us and rent a house to establish a self-study university (this term suggested by Mr. Hui Shizhi), where we shall practice a communal life. It can also be called the "work-study group.