In October 1929 the communists made a strategic wthdrawal from Jinggangshan to the town of Ruijin (Juichin in older translations) in the mountains on the Fujian-Jiangxi border. In November 1931 the Chinese Soviet Republic was formally declared with Ruijin as its capital. A series of encirclement campaigns by Nationalist forces eventually forced the evacuation of Ruijin and the start of the Long March. 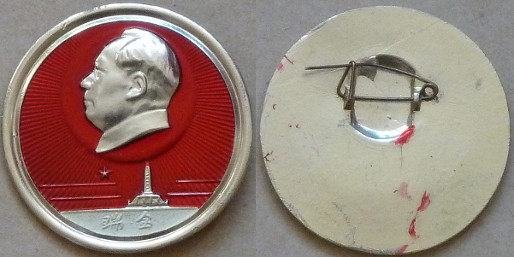 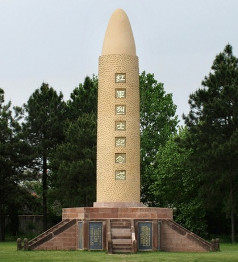 The Red Army Martyrs' Monument at Ruijin is shaped like a bullet and stands 13m tall on a plinth in the shape of a five-pointed star. Completed at the end of January 1934, the monument was demolished by the Nationalists soon after the evacuation of Ruijin and was rebuilt in 1955.

The badge at right is from an eight-piece set (probably commemorating the Long March rather than Mao's career), and depicts both the monument and the Great Hall of the Provisional Central Government of the Soviet Republic of China.

Until the adoption of pinyin, the anglicized version of the town's name was Juichin, and "Jukin" may be unique. Furthermore, the word spacing on the reverse suggests that the designer had little familiarity with the English language; which raises questions about who issued the bi-lingual set, and who was the intended audience. 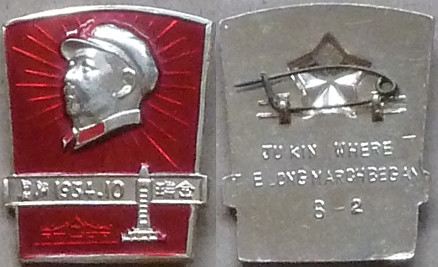