The badge at left was issued to commemorate the establishment of Changsha City Revolutionary Committee on 28th February 1968, the badge at right was issued for another revolutionary committee in Changsha during April 1968; and both depict a pavilion on Jiuzi Zhoutou, Orange (or Tangerine) Island.

A very similar (or the same) building, known locally as the Wangjiang Tower, now stands at the southern tip of the island where it is overlooked by a gigantic 32-metre bust of the young Mao.

Changsha is where Mao was a student and where he became a revolutionary. Changsha (1925) is also the title of the earliest of his published poems, which refers to Orange Island as a place where he would wander with friends and go swimming in the river. While these badges acknowledge Mao as national leader, there is no doubt they also celebrate a local hero.

(to the tune of Chin Yuan Chun)

On the tip of Orange Island,

I see a thousand hills crimsoned through

By their serried woods deep-dyed,

And a hundred barges vying

Fish glide in the limpid deep;

Under freezing skies a million creatures contend in freedom.

Brooding over this immensity,

I ask, on this boundless land

Who rules over man's destiny?

I was here with a throng of companions,

Vivid yet those crowded months and years.

Young we were, schoolmates,

Boldly we cast all restraints aside.

Pointing to our mountains and rivers,

Setting people afire with our words,

We counted the mighty no more than muck.

How, venturing midstream, we struck the waters

And waves stayed the speeding boats?

from: Poems by Mao Zedong 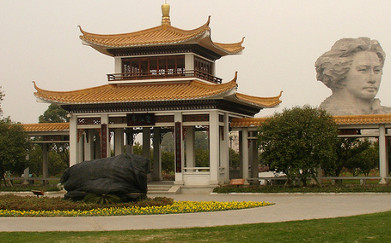 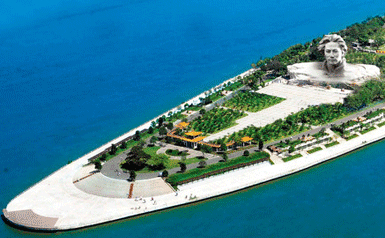 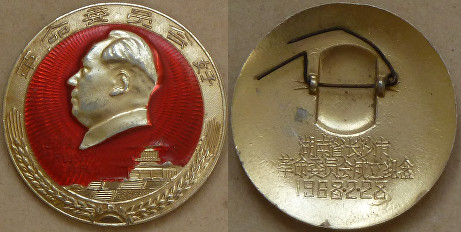