During the Cultural Revolution the importance of real-life models became devalued partly because they were replaced by fictional characters, such as the girl with the red lantern, from the model revolutionary works; and partly because some models merely represented simplistic political viewpoints. The most notorious of these was Zhang Tiesheng, the "hero of the blank answer sheet", who complained that his inability to pass university entrance examinations should not be a bar to him attending university. Nevertheless, the Party did promote individual models especially during the loyalty campaigns of 1968. Two notably self-sacrificing models featured on Maozhang were Li Wenzhong and Men He.

Li Wenzhong was a young PLA soldier who in 1967, along with other members of his platoon, saved some Red Guards from drowning but lost his own life in the process. Li was officially praised for "helping the left and cherishing the people". The campaign that promoted Li as a model introduced the phrase "Boundlessly loyal to Chairman Mao". This badge commemorates a 1968 exhibition about Li.

Men He was killed in 1968 while protecting people from an exploding fireworks store. What made him special was that Men was not a soldier, he was a political instructor - a cadre. Since the summer of 1966 cadres had become something of a despised "class" and an obvious target for the revolutionary masses. Men He was not just a martyr, he was a cadre-martyr. In April 1968 he was posthumously given the title "A good cadre boundlessly loyal to Chairman Mao's revolutionary line", and became the figurehead for the "Three Loyalties" campaign. The message was hammered home through numerous posters and booklets, and the authorities did nothing to discourage a minor Men He cult that included his bereaved family and his home village.

Despite his civilian status, Men He seems to have been retrospectively co-opted by the military. The badge below, which has the obverse inscription in Mao's calligraphy "Learn from Comrade Men He", was issued on Army Day 1968 and carries a reverse inscription, "Learn from the PLA! Respect the PLA!". This erroneous impression was reinforced by illustrations showing him in military uniform. 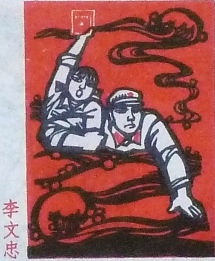 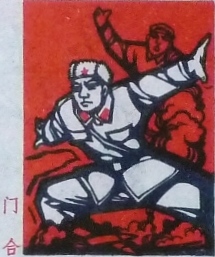 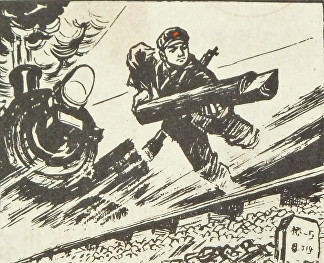 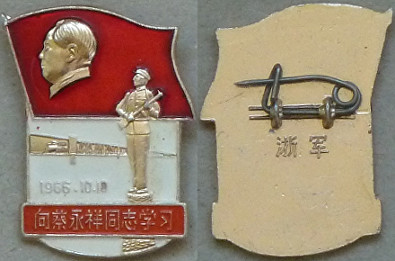 Cai Yongxiang was an 18-year old soldier  who was assigned to guard the Qiantang River Bridge in Zhejiang Military District. On the morning of 10 October 1966, just as a train full of Red Guards was approaching, Cai noticed a log laying across the tracks. He dashed forwards and managed to heave the log aside, but had no time to jump clear. Cai was struck by the speeding train and was killed instantly. He was declared a model hero because his selfless devotion to duty saved hundreds of lives and prevented serious damage to a vital railway bridge. The obverse inscription reads, "Learn from Comrade Cai Yongxiang".