Large-scale water management, either to provide for irrigation or defence against flooding, is a long-standing attribute of state leadership. The badge at right combines two faces of Mao - the revolutionary leader of the 1940s (symbolised by Yan'an's bridge

and pagoda), and the national leader of the 1950s (symbolised by a huge dam and tractors in fields)

with the single inscription "Great Achievement".

By the 1950s, in addition to water conservation and protective dykes,there was a third aspect to water management: the generation of electricity, symbolised by the inclusion of pylons. Rural electrification was essential to Mao's Great Leap Forward vision of developing light industry in the countryside. 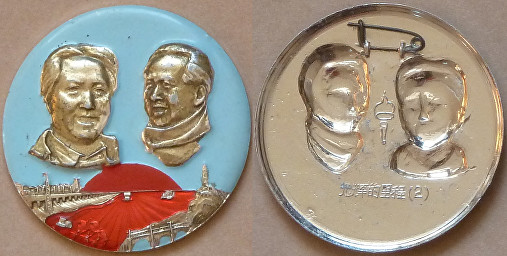 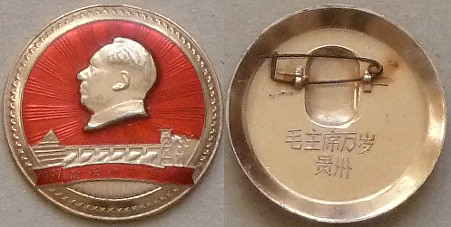 On the two badges below, and on many others, dams that produce electricity are symbolically linked to the modernisation of the countryside and increased agricultural output. 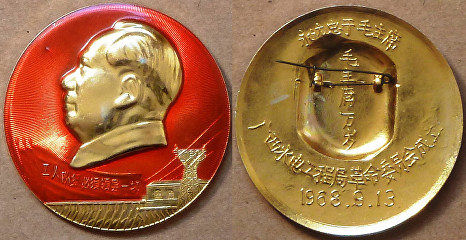 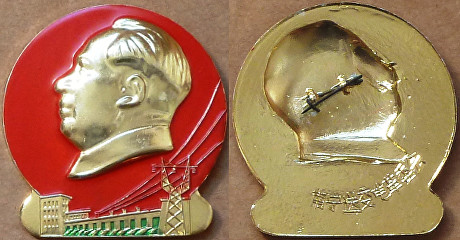 In 1958 China produced only 27,000 tons of aluminium, much of which was consumed by the expanding electrical distribution network - cable was required not only for long-distance power lines, but also to connect the thousands of wired loudspeakers that relayed broadcasts from the Centre to every rural commune, urban district and factory.

It was a massive increase in aluminium production during the early 1960s that enabled the Maozhang phenomenon.