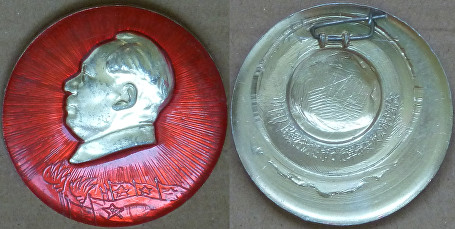 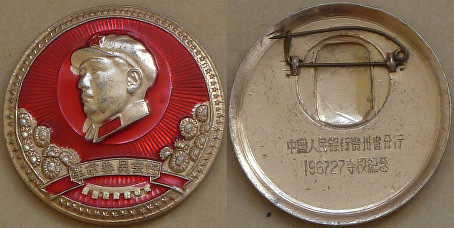 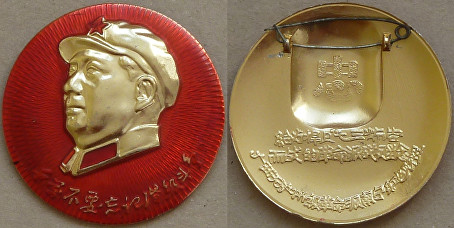 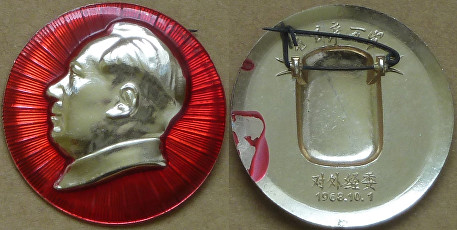 Nothing enabled the growth of capitalism more than money - portable and transferable tokens of value. Marxist theory provided no practical alternative and 20th-century urban populations could not exist without a ready supply of money that, at least in the short-term, held its value. During the War of Liberation inflation and the creation and circulation of different currencies had created financial chaos. Mao, Like Lenin before him, opted for state control of all banking and financial activities.

Established in late 1948, by the end of 1950 this was the only bank in China. Like all other state institutions it was overtaken by the rapid development of the Cultural Revolution. The badge below left commemorates the "power seizure" at the bank's Guizhou main office on 7th February 1967. The undated badge below right commemorates the establishment of a revolutionary committee at the Shenyang branch office.

This was the name adopted by rebel worker factions in various parts of the country including Shanxi, Shaanxi and Guangxi. It is likely that Red Trade and Finance formed, or aspired to, a nationwide mass organisation of workers drawn from banking and financial administration. The badge below left was issued by Proletarian Revolutionaries of Guangxi Nanning Red Finance and Trade Under Revolution. The badge below right was issued by a similar group, the Finance and Trade 8.15 East is Red Column in Wangjiang County, Anhui.

The badge at left has the obverse inscription, "Never Forget Class Struggle". The issuer is named on the reverse as the Proletarian Revolutionary Faction of Guangxi Nanning Red Finance and Trade. The upper part of the reverse inscription reads, "To defend the 7.3 announcement and to commemorate the revolutionary comrades of the war". This refers to the Central Committee directive issued on 3rd July 1968 that demanded an end to the violence and disorder in Guangxi, including the theft of weapons and supplies destined for Vietnam. The result was that, with the support of the PLA, the Guangxi United faction (of which Nanning Red Trade and Finance was a part) attacked and destroyed the rival 4.22 faction during two months of bitter fighting that killed thousands. 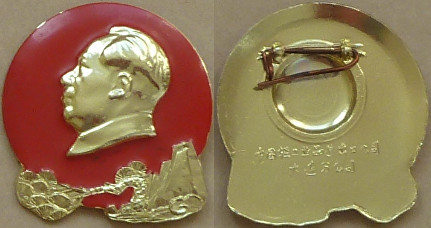 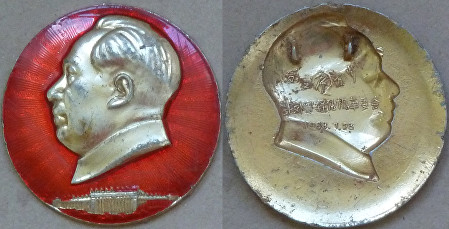 A Ministry of Trade was established in 1949, and was renamed the Ministry of Foreign Trade in 1952. By the mid-1960s, despite the US-led embargo and the Sino-Soviet schism, exports (raw materials, agricultural produce, and manufactures, especially textiles) made a not insignificant contribution to the national economy. Even as the Cultural Revolution swept through Guangzhou, the 1966 Canton Trade Fair did nearly half a billion US dollars worth of business. However, in order to ensure the security of the trade fair the Minister for Foreign Trade suppressed the local Red Guards and the rebel backlash resulted in the ministry being denounced as a black headquarters of revisionism. Zhou Enlai had to shelter the minister from the people's fury. A degree of order was restored in 1970 when a military officer was appointed to head the ministry.

The badge below left was issued for National Day 1968 by the Foreign Economic and Trade Commission.

The badge below right was issued by the Dalian branch of the Chinese Light Industry Import and Export Corp.