This hand-painted bamboo badge shows a building in Ciping, which was then the largest settlement in the Jinggangshan Base Area. Ciping was the de facto seat of the Workers' and Peasants' Democratic Government that promulgated the Jinggang Mountains  Agrarian Law in December 1928.

Most of the buildings in Ciping were destroyed by the Nationalists after the Mao-Zhu Army relocated to the new Central Area at the end of 1929. Some of them, including this one, were rebuilt during the 1950s. 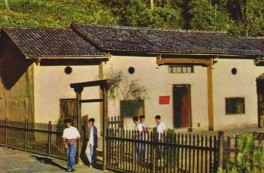