Arising from the ruins of a bombed-out Japanese steelworks subsequently looted by the Russians, the Anshan Steel Company (abbreviated to Angang) began production in July 1949 and quickly became the country's most important steel producer. The plant was rebuilt with the assistance of Soviet engineers and was initially run according to the Soviet management model with a single individual in overall control.

The badge at right was issued in the name of Anshan city. 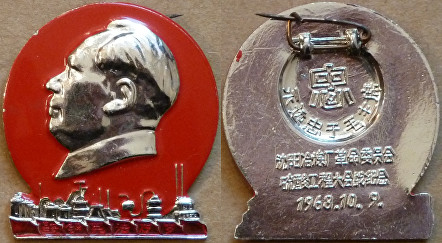 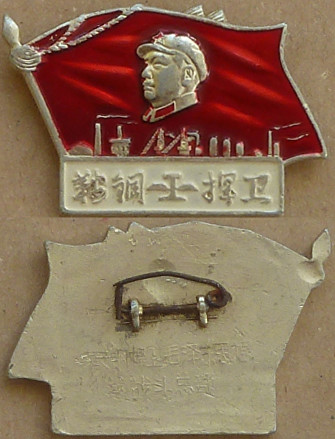 As relations between China and the Soviet Union became increasingly strained in the late 1950s, the suitability of the Soviet industrial management system was called into question. On 22nd March 1960 the Central Committee approved a series of reforms based on recommendations made by Anshan municipality. The reformed management system, which introduced much greater worker participation, was known as the Angang Charter and became the model for other enterprises. The Angang Charter emphasized that workers' enthusiasm in production should be based on workers' consciousness. Workers should recognize that they were the masters of the factory, and that their production contributed to the long-term interests of the working class as a whole.

The two badges below have the obverse inscription, "Long Live the Angang Charter", with statements of loyalty to Chairman Mao on the reverse. The badge at left, which also bears the date of the charter, was issued in the name of Angang; the badge at right was issued by workers at a smelting plant in Shenyang.

During the Cultural Revolution there was factionalism in Anshan, but it did not reach the same degree of destructive militancy as it did in places such as Wuhan or Nanning.

The military-style badge above was issued by the Anshan Independent Corps.

The obverse of the badge at left has the Angang logo between the words "Angang Defender"; the reverse inscription reads, "Angang Defend Mao Zedong Thought Combat Team".